The Weekly Writing Challenge from The Daily Post is about “glimmers of a beginning” of a story.

(more pictures in a gallery below)

To recap, here’s what to do for the challenge. As always, feel free to adapt the challenge as you see fit. The object is to get you writing:

The details I tended to notice were noises in my surroundings.

Sitting at Panera Bread, a young woman chatters animatedly at her parents about her “boss and boss’ boss”.  The mother sits silently chewing and nodding, chewing and nodding, not bothering to interject, and the father stares uninterestedly at the screen of his flip phone.

A car on the right side of the isle begins to bleat an alarm, and shortly after so does one to the left.  It wasn’t too difficult to imagine a well-timed car alarm rendition of “Carol of the Bells”, probably as a commercial for car insurance or something.

It’s easy enough to “spot a shot” to take, but it’s another thing entirely to physically bring all the elements into line.  Focus, angle, shutter speed… Traipsing through nearly knee-deep snow to capture that perfect photo.  As I try to focus my mind as well as the camera, birds flutter and chirp overhead almost like little children demanding to have their picture taken.  And just like little children, heaven forbid if they stay still long enough for a decent picture.

Bringing it all together…

How can a person be expected to engage with the sacred respite that is Wintertime amidst the constant clamor of “The Holidays”?  Parking lots are jammed to bursting at shopping centers, with car alarms bleating like the beginnings of a bizarre carol fit for a cheesy car insurance commercial.  Beyond the teen years, most people tend to have one of two reactions to the garish procession that is “The Holidays”, exemplified by a family trio I encountered at Panera Bread this evening.  The Holidays were aptly represented by the young, 20-something daughter, looking her holiday best and chattering away in an obnoxious staccato about her “boss and boss’ boss”.  The mother as Dull Observer listened to her chittering daughter, dumbly nodding and chewing, assenting and consuming, and the father as Apathetically Tuned Out stared zombie-like at the screen of his flip phone.  It requires significant effort to disentangle oneself from the mire of lights, colors, and noises of The Holidays.  I took just such an effort in driving to the college-campus-turned-post-semester-ghost-town for some snowy photography opportunities.  Even as I traipsed through nearly knee-deep snow to capture that perfect shot, birds fluttered and chittered noisily in the bare branches overhead like little children demanding to have their pictures taken.

That was probably far too much material for one paragraph, but oh well.  It was a fun exercise none-the-less.  As to the snowy photography, here’s a gallery of the pictures I took 🙂 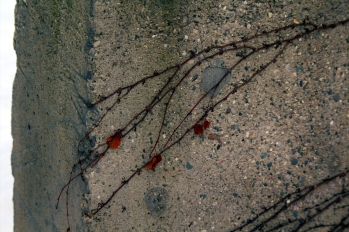