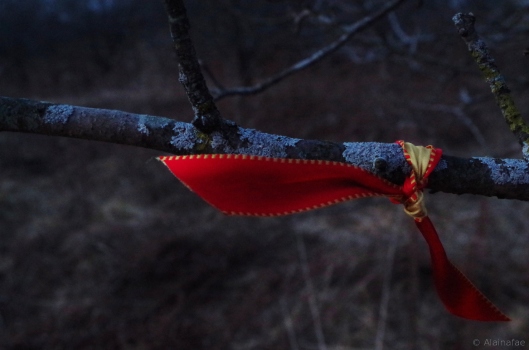 Yes, it has taken this long to get around to posting about the Winter Solstice of 2014.

The second book, The Return of the Light: Twelve Tales from Around the World for the Winter Solstice, is a small and beautiful compilation of short stories originating from a variety of places such as Venezuela, Scandinavia, Uganda, China, India, and more.  While we did decorate a small “Christmas tree”, we also put together a simple wreath mandala that reflected our understanding of the Wheel of the Year and including symbolic representation of the flowing Awen.  We did what we could with inexpensive Christmas decorations we could find at nearby stores, lacking the resources, time, or patience to make decorations of our own for this year. 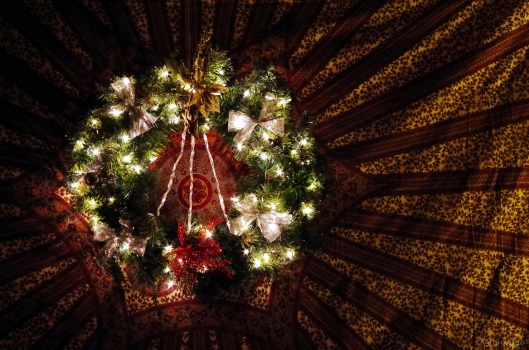 Drawn as points on a circle, the Winter Solstice falls at the top of the Wheel of the Year for the Northern Hemisphere.  Wildhorn Rock is the place on Dreamvine Circle that most closely correlates to the Summer Solstice, so it made sense to seek out a place in the northern apple groves that had energy correlating to the Winter Solstice.  Although it took almost two weeks to come to a decision on the location, we still had approximately a week before the Solstice to prepare the space for our Winter Solstice ritual.  Preparations included frequent visits, meditation within the space (in spite of the cold), and leaving offerings. 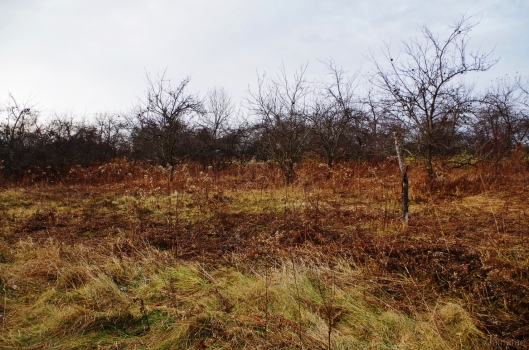 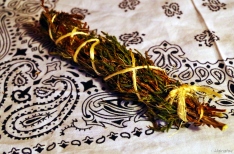 As part of exercising our learning in the Bardic tradition through the OBOD distance learning course, we composed a poem of a few short stanzas for the ritual itself.  This ritual would be the culmination point of a cleansing ‘pilgrimage’ to all four nemetons. The Winter Solstice is one of the times that some Celtic peoples traditionally cleaned their homes, and sprigs of juniper (see the Carmina Gadelica, Carmichael 1997) was one of the more commonly used herbs (along with vervain and rosemary) for cleansing purposes.  Our ‘cleaning of house’ would be then to cleanse the whole energy of Dreamvine Circle with song, chanting, and burning of juniper bundles carefully harvested from Crane’s Cauldron.

The weather was mercifully mild for late December, with temperatures hovering just around freezing but no wind or snow.  Here are some images from the long trek (hover over the images for more info): 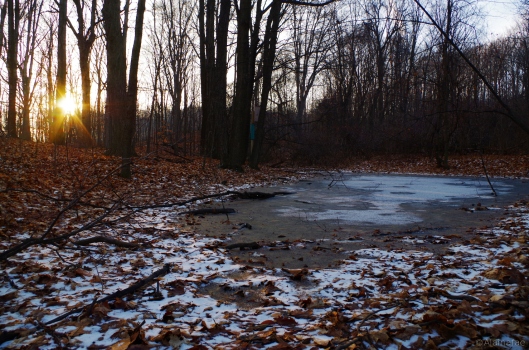 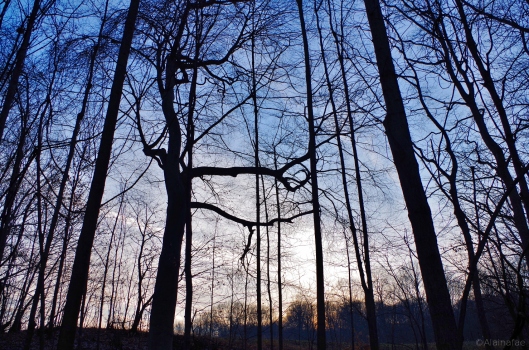 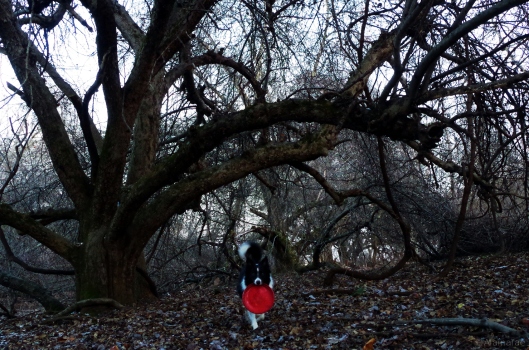 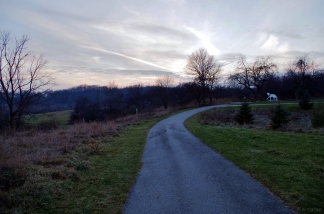 An image formed in my mind’s eye as we traveled the Dreamvine Circle: dim points of light representing each location along the circle suddenly shining brightly with each stop.  The energy raised was palpable by the time we finished with the field we intended to conduct the ritual in.  The sun was officially setting now, and the last of the other park visitors had vacated for the night.  This time of day is an in-between, a liminal time; Celtic cultures often regarded liminal times and places such as sunset and solstice and seashore of particular spiritual significance.  After spending an hour walking in the cold, we took a few minutes to warm our cold fingers and toes in the parked car before heading back out for the ritual. 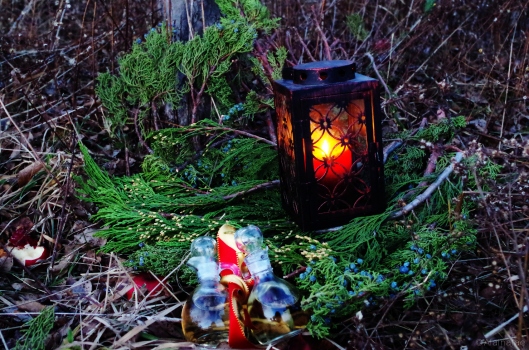 We brought a golden candle, to represent the energy of the sun, and a metal and glass container with which to protect the flame from the wind (and the dry brush from the fire).  While we didn’t find boughs of pine, we had plenty of locally-purchased cedar boughs to spare and made a bed of these for the spirits to rest.  The yellow cones are from the male Eastern Red Cedar and the blue juniper “berries” (which are actually also cones, hence its classification as a conifer tree) are cones from the female Eastern Red Cedar tree.  For pouring of libations as a special offering, we brought small decanters of Michigan apple wine tied with clooties to be imbued with the ritual’s blessings.

The blessings below were adapted from ones listed in the Carmina Gadelica (Carmichael 1997), and the Bardic Reflection on Alban Arthan is an original work by us.

Blessing of Peace (for opening cleansing/smudging)

On this day, if we listen

The seed of light, swallowed in darkness,
shall be reborn, now transformed
A thing thought vanquished and dead
now alive again, emerging amidst stillness and white.

We cleanse the way and smudge the groves –
mirroring the dance of the planets above –
with smoke and prayers of the yuletide log,
and sacred water, gifts for the child divine.

On the edge of winter,
where the oaks are bare in their defeat
and evergreens victorious guard the meadow,
the oak king returns as the bright child divine.

On this day, if we listen, we hear the dance of dances,
hear the turning of the Wheel,
Winterwood, Greenwood, Oak and Holly –
Serenade the earth with prayer.

Farewell, Senex the old
in your black and crimson, evergreen and gold,
go now into the tomb of winter, clear the way
For Puer the young, the oak king reborn, the radiant child
in scarlet and emerald, yellow and purple,
emerging now from the womb of winter, bringing light of day.

Libation of Wine and the Christening of the Oak King

O Holy Ones,
Bless this child and bless this day
Of new beginnings.
Smile upon this child
And surround this child,
With the soft mantle of your love.
Teach this child to follow in your footsteps,
And to live life in the ways of
Peace, love, abundance, and charity.

Blessing for Peace (for closing after tying the blessed clooties)

May the blessing of light be upon you –
light without and light within.
May the blessed sunlight shine on you
and warm your heart.

May love and laughter light your days,
and warm your heart and home.
May good and faithful friends be yours,
wherever you may roam.
May peace and plenty bless your world
with joy that long endures.
May all life’s passing seasons
bring the best to you and yours!

A good friend of ours could not make it to the nemeton pilgrimage and ritual, but we were able to come to her house afterward and have a wonderful Winter Solstice feast.  There was even time enough after eating, chatting, and exchanging gifts to re-enact some of the ritual within the space of her living room in front of the fireplace burning the yule log.  It turned out to be a great and satisfying holiday 🙂 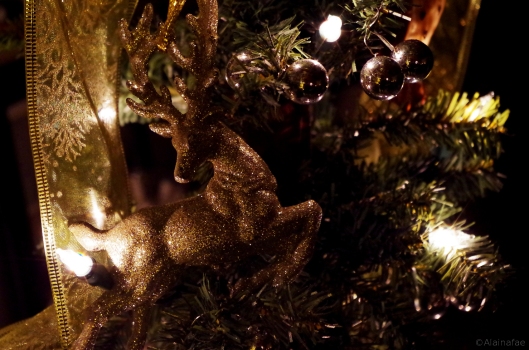 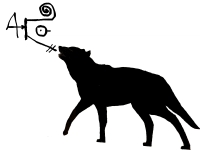