These two chapters were rather short, so I think I can successfully hash them out in a singular post.  After Shepard substantiates the virtues of the Oak Savanna biome model for the purposes of restoration farming in North America, he addresses other viable biomes in Chapter 8 that may in fact be more suitable for a particular area than the Oak Savanna model.  The biome list includes Temperate Riparian Zones, Northern Pine Forest, Boreal Forests, and the Subtropics.

Humans have developed thriving cultures in almost all biomes on Earth, with the exception of Antarctica, and our adaptability, one of our key strengths, can and should be harnessed to create a lasting culture whose means of subsistence maximizes benefits to humans and to their environment.  This is the crux of the ethic that restoration agriculture is founded upon.  Within every biome listed above is the capacity to grow perennial staple food crops at each layer of succession from grasses all the way up to the canopy; it is not a matter of ‘if’ but ‘how’ (see my post on Chapter 7 for reflections on the ‘how’).

The defining characteristic of Temperate Riparian Zones is moist yet well-drained soils resulting from periodic flooding.  This flooding causes nutrient-rich deposits of sediment to settle in the topsoil and groundwater to be located close to the surface, making those areas resilient in the face of drought conditions.  Pecans and walnuts, members of the Juglandaceae family, ideally form the protein-rich backbone for a restoration agriculture project in these zones.

Northern Pine Forest is not the official name of that biome, but, as Shepard says on page 106, it is a zone that is recognizable while also being very diverse.
“It shares apples, hazelnuts, raspberries and cherries with the oak savanna and raspberries and grapes with temperate riparian systems.  It shares pines, blueberries, lingonberries and cranberries with boreal forest systems.” – p 107.

The most significant issue for restoration agriculture in the Boreal Forests of North America is a lack of native genetic complexity.  This certainly does not mean developing a system for these regions is not possible, only that species imports from other continents can be necessary to bolster stability.  An example of this would be introducing the bean-producing Siberian peashrub (Caragana arborescens) to Boreal areas of Canada.

There are very few true Tropical or Subtropical Zones in North America.  What they lack in presence they make up for in opportunity, however: the number of perennial food crops that can be grown in these regions is staggering.  Variants of plants bred in Tropics and Subtopic Zones like as bananas and pomegranates can become and already are available to much colder climes, such as the specimens that exist “outdoors, unprotected in Washington D.C.” (p 111). 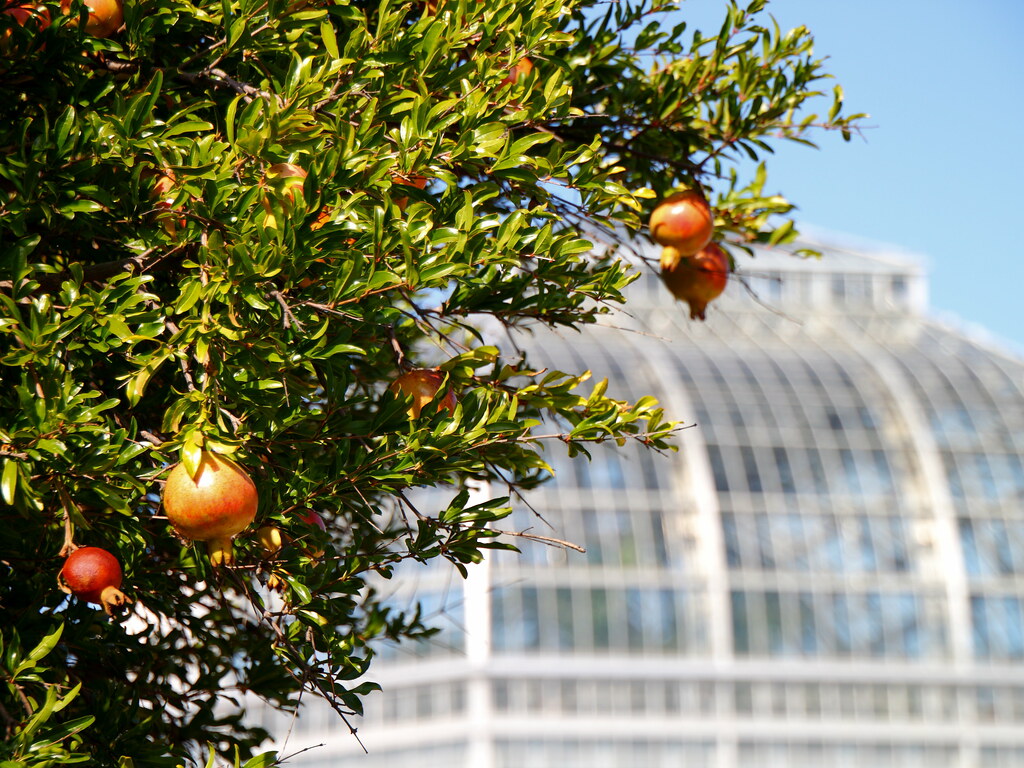 Pomegranate tree fruiting at the US Botanic Garden, Washington D.C. (photo credit to Mr.TinDC on flikr)

Plant selection for restoration agriculture seems to be tailored around an area’s biome and microclimates, whereas livestock selection has more to do with available space and what the farmer can successfully manage, much like current methods of animal husbandry.  The difference is restoration agriculture’s integration of animal husbandry, ideally in polyculture, into maximizing food crop production.  We see a variety of plants growing in a single area on a regular basis, so it is seems easier to envision the plant-oriented model of multi-species cooperation than it does to work with a multi-species animal model.

As with the niches represented in the different layers of succession for plant growth, animals occupy a niche within their ecosystem in nature.  The niches animals occupy are more ephemeral though, such as only at night or only for two weeks out of the year in a given location.  In a similar way, livestock can be rotated through different pastures designed with permaculture in mind.  While keeping animals is not necessary to a successful restoration agriculture system, they can provide numerous benefits such as weed and pest control, clothing, food, additional income, and especially fertilization services (p 116).

Cattle, hogs, sheep, goats, turkeys, chickens, and geese are all touched on in Chapter 9, with cattle being the primary focus.  The main concerns Shepard covers are stocking rates, overgrazing, pasture rotation, and disease management.  It was fascinating to consider all the variety ways these different animals interact with the same space and thus filling their individual niches.

Although the multi-species, mob-stocked, rotational grazing approach allows fewer of each type of animal to be kept on a given parcel of land compared to an animal monoculture, the total pounds of livestock weight per acre have been shown to be greater, according to Shepard.  Additionally, the pasture and soil health is vastly improved with comparatively minimal inputs.  Maintaining stocks of multiple species also buffers the farmer from fluctuations in a given market.  Having not been exposed to the animal husbandry aspect of farming all that much growing up, I cannot provide a very critical analysis of this chapter; not sure how much of the information in this chapter would be new or surprising to veteran farmers.

Shepard addresses an interesting point in this chapter: the vegetarian/vegan perspective.  Many calorie and protein substitutes for meat and other animal products in these lifestyles are derived from the detrimental annual crop industries of soy and corn.  Aside from extensive use of agro-welfare and and chemical management that directly harm humans in economic and health aspects, these industries harm the environment by creating habitat deadzones as well as stripping that area’s resources bare over time. In this way “annual agriculture is hostile to animals”, taking “existing, functional, animal-supporting ecologies and destroys them…” (p 117).  I have attempted maintaining a vegan diet in the past and still try to minimize meat consumption where possible for economic and environmental reasons, and I think this information would have dramatically altered my dietary selections from primarily annual to primarily perennial products during those times.

Bread made from Chestnut Flour

The next chapter discusses the role of beekeeping in restoration agriculture, a topic I am very much looking forward to.  As always, please share your thoughts in the comments!