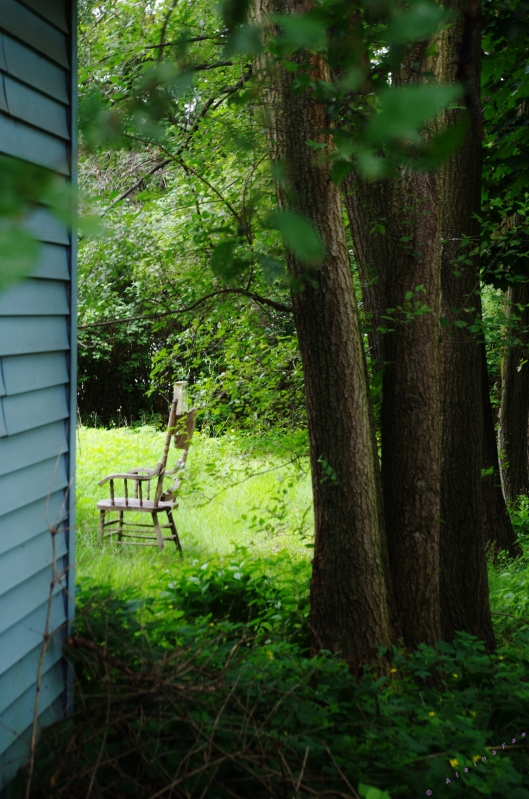 Elegance, detail, and genuine ornateness of design for furniture had greatly declined in favor of sharper, more geometric modern styles.  In my personal opinion, this is a loss of artistry.  While I can appreciate the colors and clean lines of more modern furniture designs, the pieces that catch my eye are the kind that have graceful curves and delicate flourishes, the kind you typically find in antique shops more often than not.

This photo, though, was taken in the overgrown lot south of my parent’s house.  When I was young, some elderly neighbors lived in a house of the same color as the garage in the left portion of the photo.  For whatever reason after the elderly couple left, the house was taken down but the garage was left standing.  I believe the property is now owned by the church across the large parking lot from the property, but it is mainly used as a dumping ground for fallen leaves and sticks now.  Wandering through the yard taking pictures with the new Pentax K-30 with 18-55mm kit lens birthday gift, I spotted the damaged and lonely chair in the grass where the house previously stood.

I moved as close as I could without what I could discern as trespassing and pushed the limited zoom on the lens as far as I could to capture this image.  Would have perhaps preferred a closer view of the chair’s details, but I didn’t quite possess the gumption to attain it.

Not only is this battered old chair a relic of the former inhabitants and the former house but also former ways of life.  That’s why I chose this photo for this Weekly Photo Challenge from The Daily Post.